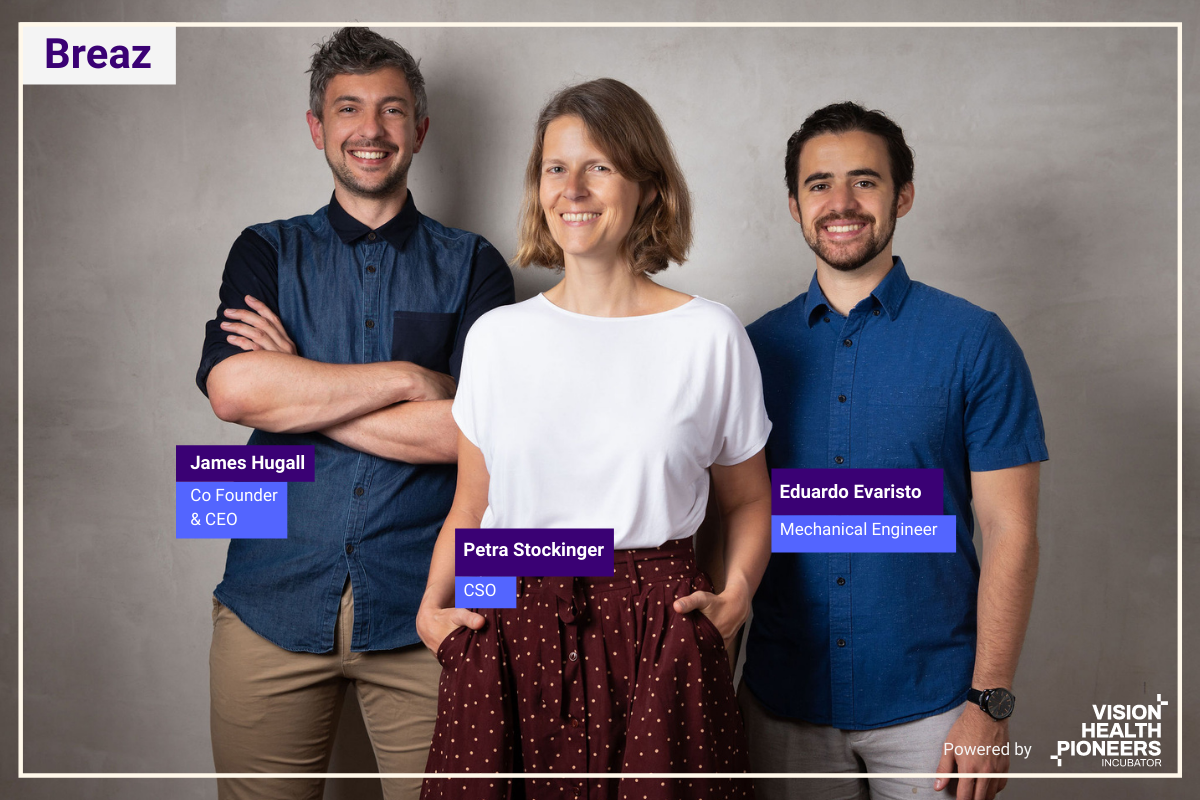 Posted at 08:33h in Inside the incubator by Ben Butler

“A lot of people put the emphasis on the heart but our lungs are equally important. After all without oxygen, the blood the heart pumps is useless. Cardiovascular diseases get the fame for all the right reasons, but now we want to raise awareness and contribute to making lung health considered just as important.”

These are the words of James Hugall, Co-Founder and CEO of Breaz. In the following interview, the Breaz team speak openly about making the invisible damage of COPD, visible – The lung diseases they are trying to tackle, what drives them to make a difference and what the future has in store for their device. They also share why now might be the best time to make something come to full fruition.

James explains what they mean by this. “The impact of COVID19 may impact the awareness of respiratory diseases like chronic obstructive pulmonary disease (COPD). Before this time, many people would feel a pain in their chest and just think they are getting old or not being as active as they could be. We want to change this mindset and bring our product into the market to help analyse people effectively.”

James, who is from the UK, originally began making his plan for the business in Barcelona, Spain. He worked there as a scientist in academia before moving to Berlin, Germany to enrol with the Vision Health Pioneers Incubator. James is joined by Co-Founder Austrian Petra Stockinger and Eduardo Evaristo, Mechanical Engineer from Venezuela. Combined this international team is focused on improving people’s lives and making the invisible damage of COPD, visible.

The Breaz team have a vision for their product to be considered as everyday as a thermometer or a blood pressure monitor. “These devices allow us to quickly understand what risks we have of certain diseases. We want the same for lung health. ” Petra says. 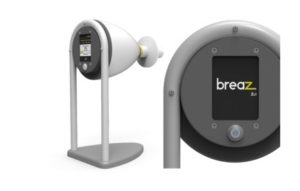 The Breaz prototype is a simple to use device which measures and grades respiratory diseases like COPD. All patients need to do is breathe normally and within a couple of minutes the doctor receives the results. They can then choose the best next steps, whether further tests, or beginning or adjusting treatment.

“We want to make it simple to use and reach as many different settings as possible. In primary care but perhaps also pharmacies and even the gym. Whenever the individual wants to check their lung health, they can.” James says.

Both James and Petra are scientists and have previously worked in an academic setting. Whilst completing their post-doctoral work, Petra was working in biology and James in physics. Both knew they wanted more. 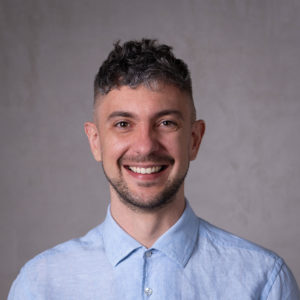 “We wanted to get out of the scientific world and into something more applied, that’s where our interest for healthcare innovation took hold.” James says. Only despite this inspiration happening at similar times for them both, they didn’t know each other at the time. “That desire for something more took us to the d.HEALTH course in Barcelona. This is where you try to create a business idea based on a real experience in a clinical setting.” 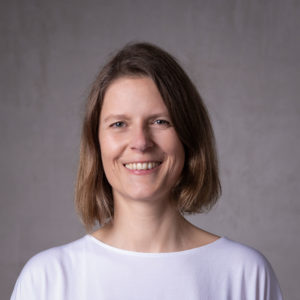 They worked in different teams on the course which explored unresolved clinical needs that doctors faced. For two out of the nine month course, this focused on hospital immersion. Petra describes this time. “We discovered hundreds of needs and then we needed to try and filter them down to just one that would have the biggest impact, if it were worked on. James was in the respiratory team and saw first-hand the shocking amount of people suffering from COPD.”

James continues with what this experience was like, “I really wasn’t aware of it before that moment, it surprised me. More than half of the people there were dying from this disease. We only saw them at the very end and it was horrible to watch. To see the suffering.” It was during these traumatic experiences that James saw the need for something to improve this situation.

“The current method just isn’t working effectively. From both the patient and the doctor’s point of view. When diagnosing patients, the main method is the force spirometry test, which is where the patient breathes in a whole lot of air and exhausts it as quickly as possible. It’s quite a stressful test for patients and there are often long waiting periods.”

Doctors in primary care have also complained that the test isn’t always completed effectively. Petra and James reference research which found 75% of cases are undiagnosed. (Soriano and Joan B in their paper, “Prevalence and Attributable Health Burden of Chronic Respiratory Diseases, 1990–2017: A Systematic Analysis for the Global Burden of Disease Study 2017).

“So this is where the inspiration comes from. To find a way to test these people effectively. Reduce the number of undiagnosed cases, take control early with detection and how to follow the patient throughout the rest of their life. COPD is in many ways the new stroke.”

The programme in Barcelona ended and James was inspired to do something to improve the situation. Unfortunately timing wise, Covid-19 was just starting to appear.

“That changed things a lot. It became hard to start a business and bring us all together. The team changed slightly and then by chance a colleague in an EIT Health MedTech Bootcamp mentioned the Vision Health Pioneers Incubator. It seemed like the perfect setting to build a new startup and receive really important training.”

Breaz were enrolled and James reached out to Petra again to come in and join as another Co-Founder. Despite only having a week to decide, she said yes!

Breaz were finalists in the 2021 Imagine IF! Competition

The team today splits most of the business activities between James and Petra. Eduardo, as Mechanical Engineer, focuses on the prototype of their product. They believe having strong focus areas has helped them but that this did take time to develop. Petra explains, “James comes from a technical background so he’s more on the product development side. My background is data aspects – clinical testing. We have faced challenges, like any other startup, but within the incubator of Vision Health Pioneers, that has really helped us.” 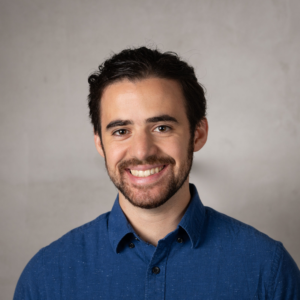 Eduardo is in charge of product development. He describes his role, “We’re a hard-tech company so we need to develop and produce a physical device. I need to make sure that it works and then test and calibrate it.” It’s clear he enjoys the design process the most and all the challenges that come with it. “There are so many decisions to be made because we’re coming up with something new. There’s no script to follow. At times I have to kind of trust my gut and then see if it works. If it does, I feel amazing. If it doesn’t, then I need to see what I can do about it.”

James shares more about their time with Vision Health Pioneers. “It’s been a good introduction to topics that would have taken us forever to try and learn. We’ve connected with some great people, received mentoring but have also seen how different startups work and operate. We’ve always really appreciated the support in preparing for what comes afterwards.”

Breaz are now excited to talk to potential investors and prepare themselves for the Demo Day on 31st August 2021 where each startup will pitch their business. They are continuing to develop their prototype and are working on the longer process of hard tech plus working on strategies for how they can sell it. They are making the invisible damage of COPD, visible.

Petra shares why lung diseases are such a worrying concern. “Air pollution, smoking, anything that irritates in the air – all of this can cause harm to our bodies. People are not always so aware of the damage the conditions around us are having on our body.”

“The global population is also becoming older. This is important because chronic respiratory diseases take a while to develop, so as people age, they can enter more severe states of lung disease.” James adds.

The team also shares that in more heavily polluted areas of the world, for example in locations where they cook inside over open fires, they are possibly at a greater risk. They also cite research from Hitchman SC and Fong GT that found smoking amongst women is increasing in some locations as social equality is achieved. (Gender empowerment and female-to-male smoking prevalence ratios. Bull World Health Organ).

For Breaz success is how the team grows from here. They believe that good people are the really important part but also how that team works together can be a challenge. They appreciate they have a complex product which requires a lot of activities running in parallel but are confident they can make it happen. By this time next year they hope to have tested their device in a clinical setting, have feedback, early adopters and overall a better understanding through user valuation research.

James going into a little detail on the current progress. “Compared to say a software based company, we have different expectations with hard tech. We’re getting to where we want to go – to have a functional demonstration of our device so we can take it to a hospital and test it, but it does take time. We can then use those learnings to develop further.”

Eduardo adds more on the why behind Breaz,

“We’re raising awareness of a massive problem that COPD represents, worldwide. We are making something and getting it out there. People are finding out too late and we can avoid that stress. It comes down to whether we choose to do something about it or have people who can barely breathe.”

Petra shares that she loves to learn, even when she’s involved in something she isn’t fully comfortable with. “We have learnt that sometimes not making a decision is worse than making the wrong decision. If you are not an expert in something, in a startup you just push yourself to make a decision.”

“We have come from science where you try to prove if something is wrong by obeying the rules of the world as you would expect it too. At the beginning of our journey, we wanted to know what’s the right answer, now we know there isn’t always one, you just take different paths.”

Breaz was born from frustration in academia, a willingness to learn of problems in clinical settings, the leap into a new country, hard work in an incubator and ultimately along the entire journey, a desire to help people.

Shape the Future of Digital Health with Us!

Benefit with up to 80,000 Euro funding, intense coaching and mentoring, free coworking in Berlin and more.