Advosense: The future of geriatric care is smart and patient-centric 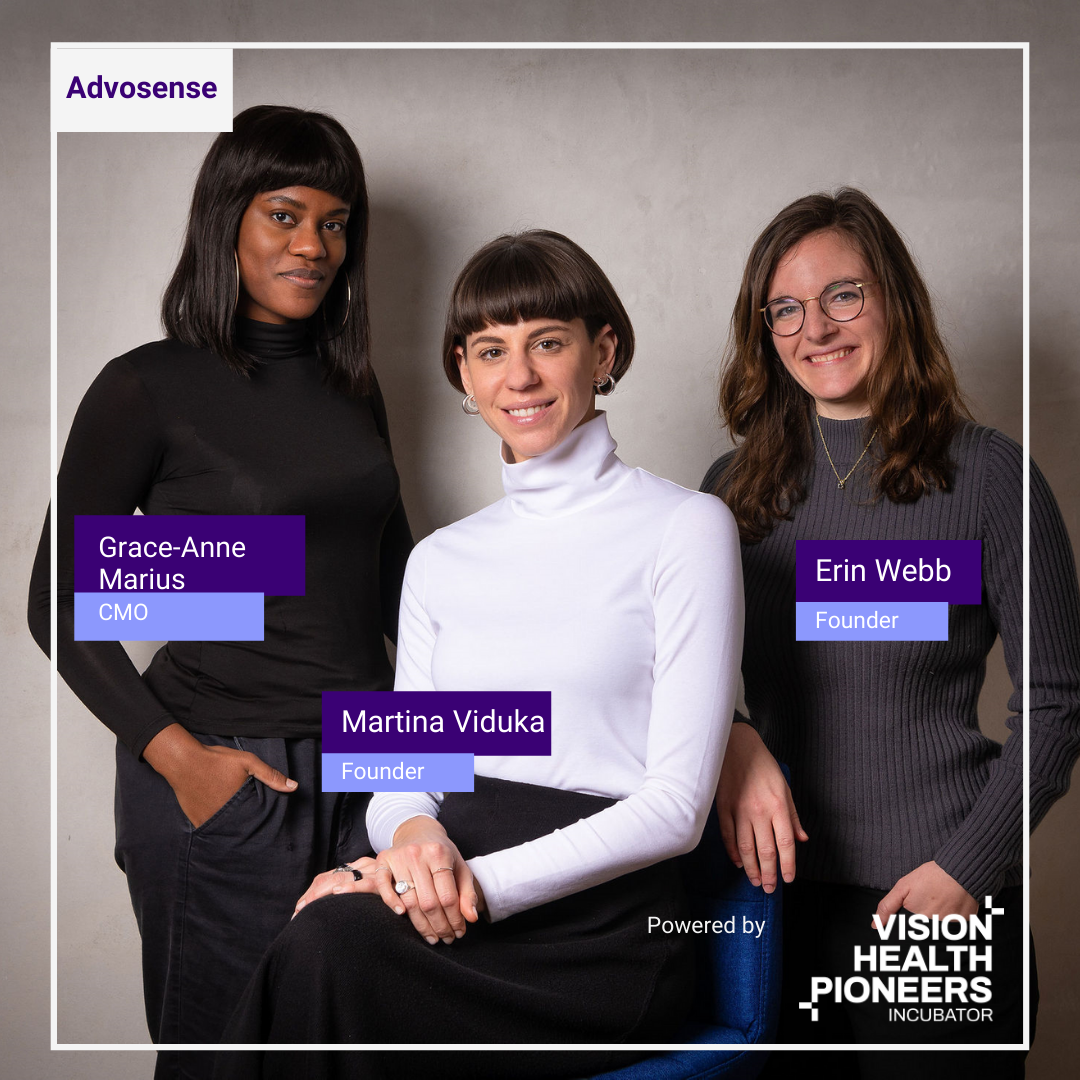 08 Sep Advosense: The future of geriatric care is smart and patient-centric

Posted at 08:47h in Inside the incubator by Maren Lesche

Martina Viduka is not quite sure what it was that first sparked her untiring passion for geriatric care, but what she does know is that there has always been a part of her that has felt drawn to and inspired by older generations.

“It’s funny, I don’t know where it came from, this soft spot for the elderly,” she says. “I think it’s something about the wisdom they bring to society, and the work they’ve put in. I feel like a lot of our western cultures just don’t appreciate that enough.”

Viduka’s fondness for the elderly prompted a career in nursing that lasted a decade, and which has provided firsthand experience and insight that has primed her for the next chapter of her life.

“I went into nursing because I wanted to somehow create a space, an age-friendly, caring space for people to age in the future,” she says. “I thought that nursing would be a good place to start, because you’re on the bedside and you really know and can see what was needed.”

Dreaming up revolutions in geriatric care

The whip smart and charismatic Croatian-Canadian is now one third of Vision Health Pioneers Incubator’s startup Advosense GmbH, having partnered up with co-founder, the Texas-born, Kentucky-raised Erin Webb in 2018. Webb brings to the table a fastidious, data-driven mindset alongside extensive management consultancy experience from working on projects for the Affordable Care Act.

As an entrepreneurial trio that includes British marketing specialist Grace-Anne Marius, their goal is to create the next generation of geriatric products. First stop: Smart incontinence briefs that use sensors to report to nurses when the patient needs to be changed.

“Right now, it’s just not possible to know when a patient is wet or not. You have to go in and physically check and there’s no best practice,” says Webb. Their product, which currently has no direct competitor, features a passive and disposable sensor printed onto an incontinence brief which notifies the clinician when their patient is wet via their smartphone, tablet or computer.

The product stands to have far-reaching impact. Over 200 million people currently suffer from urinary incontinence, an affliction which can bring about a host of complications, including pressure ulcers, falls and urinary tract infections.

Introducing smart briefs into the workflows at nursing homes and hospitals would save significant time, allowing clinicians to better care for patients’ complex needs. No event has highlighted the need for adaptations like these to be made more than the current pandemic, which has exposed shocking deficiencies in healthcare systems globally.

“You need to deal with the basics first and have the right resources for the basic care so you can really deep dive into the geriatric special needs,” says Viduka.

Webb and Viduka first met at Maastricht University, while both were enrolled in a Master of Science in Healthcare Policy, Innovation and Management.

“We weren’t friends to begin with, but as the only North Americans on the programme, we had an eye for each other,” recalls Viduka.

“Towards the end of the programme, we ended up always on the same teams,” says Webb.

“…doing projects together, and killing them,” Viduka adds.

Advosense was born in November 2018, Berlin during hackathon ‘Hacking Female Health’ – an event powered by Vision Health Pioneers partner Hacking Health, when the pair joined forces and worked as part of a team called PeriPower.

“Martina and I were sitting next to each other and I was, like, “Martina, you have to pitch something about geriatrics. Otherwise, all of these solutions are going to be about other problems that are not as inspiring to you,” recalls Webb.

PeriPower emerged victorious, a success prompting the pair to consider taking their idea to the next level. Fast forward a couple of years, a place on Fraunhofer’s AHEAD programme, a name change and now as part of Vision Health Pioneers Incubator’s first cohort, the team have set their sights on eventually bringing their product to German hospitals and nursing homes, with a view of later pitching to North American and more European markets.

But that’s still quite far down the line, as a lot of expensive processes involved in bringing medical devices to market – and making sure they are safe, effective, and usable  –  lie ahead. Two big challenges present themselves now: finding funding and validating the product.

Ingredients for the long road ahead

For now, the team has some time to reflect on the journey they have taken, where they are going next, and how Vision Health Pioneers Incubator has helped them along the way.

“Now that the programme is eventually coming to an end, I feel like a chick getting ready to leave the nest and I’m starting to get a little nervous about it,” says Viduka, who lists the mentorship and community-spirit at the incubator among its many perks.

“[The programme] really gave me the courage to move forward. Before, I felt… imposter syndrome, I guess. I still kind of do. So, it gave me the support and the tools to feel that I can do this.”

Webb agrees that the convivial spirit and guidance has been a big help, especially in managing the uncertainty involved in building something completely from scratch.

“I think that a lot of the mentorship and also being able to talk to the other teams who are going through the same thing has been very valuable,” she says, adding that the incubator’s flexibility and resilience from lockdown onwards has also been much appreciated.

It’s been an important time for the team to set upon the values that they believe will carry them through each new challenge that presents itself along their journey to revolutionising geriatric care.

“Erin and I laid out the qualities and characteristics that we’re looking for as a team, as our team grows. Resilience was one of the top ones. What else?” asks Viduka.

“Autonomy, trust, curiosity,” says Webb. “And commitment to the vision. Because it’s very important to really always be able to go back at the end of a hard day and say, “Okay. What’s driving this?” I would say that that’s essential for an entrepreneur”.

While the pair think about what lies ahead for Advosense, they are also keen to consider the twists and turns that brought them to where they are now, and the extent to which keeping an open mind has helped them both discover and adapt their mission.

That openness to seizing new opportunities as and when they arise is what led both women to joining forces, turning a lifelong dream to transform geriatric care into an actionable mission, and finding inspiration, mentorship and a community along the way.