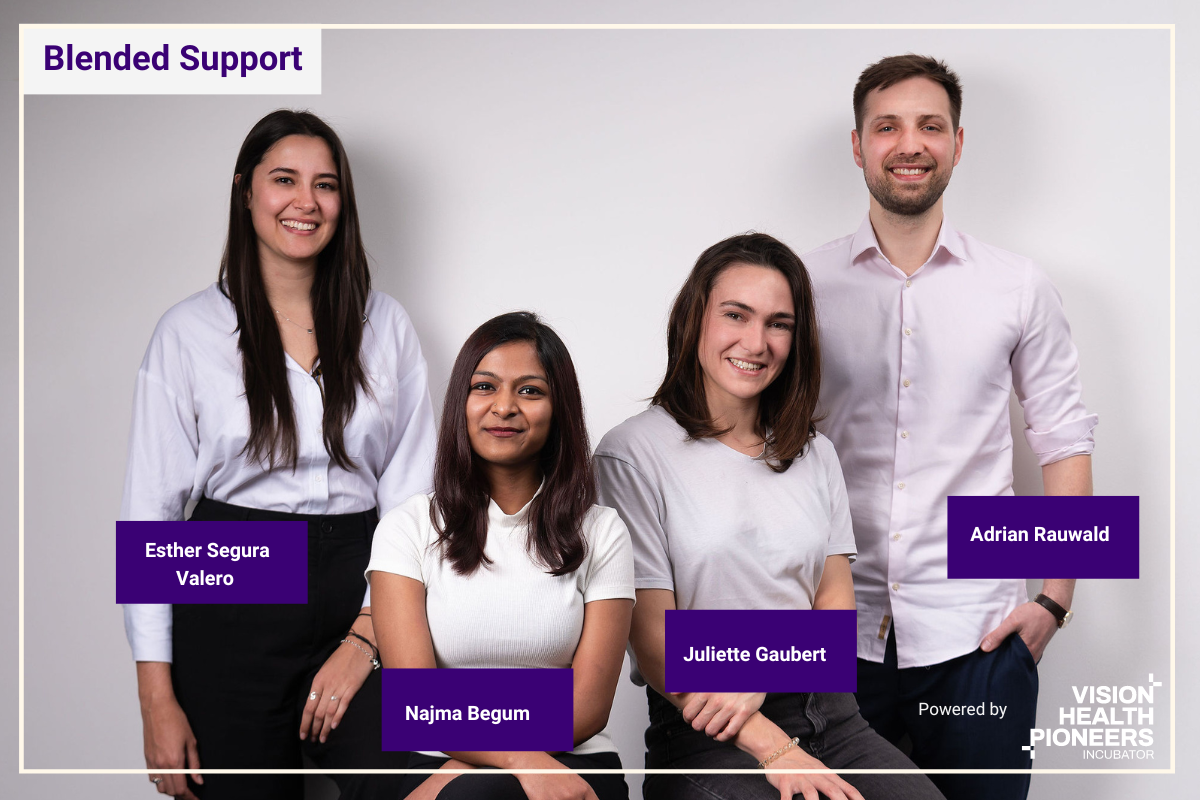 Posted at 13:57h in Inside the incubator by Ben Butler

Blended Support was created as the result of a dark place, perhaps one of the most difficult things some of us may ever go through. This is when a person experiences a distressing event and then goes through the emotional response of trauma. Whether a single incident or a series of distressing, potentially traumatic events, it can greatly impact an individual’s functioning and mental, physical, social and emotional wellbeing. It was observing these experiences that inspired Adrian Rauwald and his founding team consisting of leading psychotherapists to create their startup Blended Support and inturn provide people with fast and effective support to overcome their experiences. The social entrepreneurs envision a future where people can overcome but also perhaps grow from managing to get through these experiences. To create success he and his Co-Founders have built a team of blended skills around them and together they want to support people from anywhere, in a way that’s both barrier-free and self-effective.

Adrian has first hand experience having worked in a trauma institute in Frankfurt as a Clinical Psychologist. He openly shares that the German healthcare sector struggles in regards to trauma and that whilst problems are known, they are not currently being solved. “If you look at recent years, there were a couple of incidents in which the health care system was overloaded temporarily. Examples were terror attacks, nature catastrophies, war and of course the pandemic. As a result of these events we saw a number of patients come to the institute which we struggled to adequately and timely provide care for. I believe this needs to change.” He and the founding team shared their original inspiration alongside fellow teammates Najma Begum – Full-Stack Software Engineer, Esther Segura – Business Developer and Juliette Gaubert – UX-Designer. Together they are taking Adrian’s inspiration and building a solution to support people in walking the path of healing.

The intention behind Blended Support is to use digitalization as a way to provide low barrier help. Adrian explains further how the concept was created, “We began our journey by thinking about our role as professionals, what we actually do and what we provide. Then, we outlined the specific needs of our patients. The first phase was quite creative and fun. People were not provided with support in a counseling room, but via their smartphone or tablet. We needed to creatively adapt our interventions and we concluded that the way people are approached needed to change.” Adrian shared this idea with a number of international organizations and received positive support. It was this feedback that led the founding team of Blended Support to recruit Najma fresh from her Masters and begin to develop a prototype.

This prototype is now the basis they use within Vision Health Pioneers Incubator. It was after testing this in institutions and with patients that they would soon meet with Joscha Hofferbert, Co-Founder and Senior Advisor for the program in Berlin. Having impressed, and making it through the application process, they would soon be part of Vision Health Pioneers Incubator’s fourth cohort. Here they can take their startup to deserved and needed levels. Now a few months into the program, the team looks back and thanks Joscha who originally believed in them. “We were very excited to go on this journey and create something. Having been accepted we quickly recruited Esther and Juliette and formed the multicultural team you see today.” 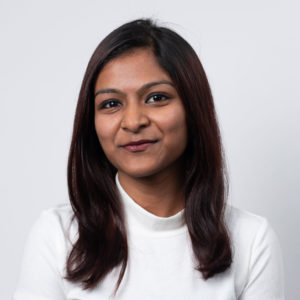 Najma is a software engineer from India who was inspired on her career path having seen the innovation taking place in her home city of Bangalore. “I was equally inspired by movies such as Iron Man where they applied exciting high tech gadgets. I thought I would give it a try and seeing as I enjoyed it, I came to Germany to study my Masters. On meeting Adrian we designed and developed together and then entered the program.”

For Juliette, she joined the team just before they stepped into the Vision Health Pioneers Incubator. She describes the process so far, “working in a field close to psychology has helped me both professionally and personally. We have created a safe space and all of us really want to make sure our app is the very best it can be.” Originally from France, Juliette studied design because she wanted to be able to help educate people and joined the team because she believes digitization, with clever design, can help the world get rid of some its frustrations.” 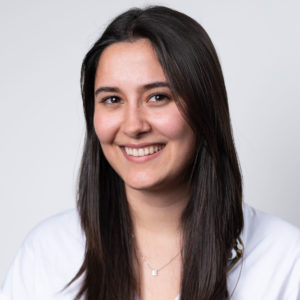 Esther shares how the first challenge the team of four faced in the incubator was getting to know each other and working through how best to align their skill sets and expertises. “Even at the very beginning we noticed that we are all people who care about each other. As a team we are willing to use this as a base for our culture and vision at Blended Support. Everyday we learn from each other and can now openly discuss when something isn’t going well and then work together to address it.” The team recognises that being efficient and flexible is needed for any growing startup. For Esther, who studied business in Spain, the opportunity to join Blended Support came at the perfect time. She has always had a strong vocation for helping others, especially when it comes to mental health. In addition, throughout her career, she was fascinated by the world of start-ups and decided to delve further into it. “The flexibility with which they operate is something I love about startups and is something very different from how businesses were presented in my studies. In these environments it is clear that you have to learn fast, have a good team to overcome the obstacles you encounter along the way and learn and grow together”. 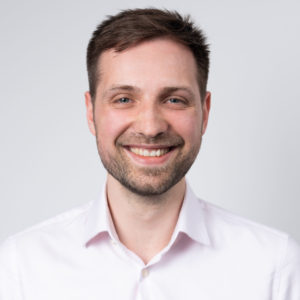 Leading this team of talent is Adrian who has a Master in Clinical Psychology and several years of experience in the field of psychotraumatology. He shares more about his experiences, “I’ve also been the go-to person in my friends groups for conversations on sensitive issues. I believe I’m good at it and do actually enjoy it. I may also have been partially influenced by my mother who is a psychoanalyst. She was working with complex traumatized patients, sometimes doing therapies lasting almost a decade. While admiring her endurance, that would have been frustrating to me. I realized that I am specially interested in the field of prevention. This is why I worked with young children and adolescents and this is also the core vision of Blended Support. Providing support at an early stage after traumatic events to prevent a longer lasting impact.”

This aforementioned app is what Blended Support are applying their talent towards. Adrian describes their aim, “Blended Support is a way of empowering people to regain control over their life. We want to stimulate people thinking about their strengths and resources, and provide them with tools to actively cope against burdens. By this we hope to increase the perception of self-efficacy of our users, which is so important for healing processes.” Najma adds to this, “it’s a way for people to get in touch with themselves again.” Adrian agrees and concludes, “ That’s true! Often traumatic stress destroys our ability to connect with the outer world and our inner world. Then, it is difficult to make sense of what is going on. People do not understand their symptoms or the reaction of their social system. We want to provide our users with meaning, by accessing education and a context for their reactions.”

Adrian applies his experiences as a Clinical Psychologist to the Blended Support app. “The aim is to increase the ability of emotional regulation. As an example, when we are very angry, we struggle to access our resources and fail to use constructive coping strategies. So our aim with the app is to bring people back into an emotional state where they are able to reflect.” 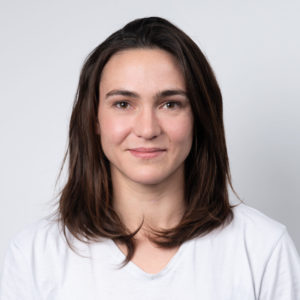 The first target group for Blended Support are companies that are often involved on a daily basis in trauma situations. Juliette shares the example of an organization such as the Red Cross and that their app will be available so the company’s workers won’t develop complex trauma. “The recent examples of the war in Ukraine and Covid19 is exactly why we want our app to be available for the first helpers in extreme situations. Those responders may suffer from shock, sadness, depression and we want to provide needed stabilization.”

Adrian explains the high prevalence of encountering traumatic events for professionals in the front line. “Those who provide first aid, the police and firefighters are five times as likely to see others die or to be involved in violence. Therefore we have chosen to target these groups first, especially as their employers are aware that they need to protect their employees from secondary trauma.” Juliette  adds that in the future they will then target the general public who may go through distressing events.

The vision of Blended Support is to make trauma healthcare available to those who are not currently able to access and use it. “Via digital tools we can cross national borders. We aim to not only connect with organizations across Germany, but also to healthcare specialists across the globe, such as Afghanistan or Ukraine. In ten years time, we want to have a worldwide connection where digital tools are available for anyone who needs support.” says Adrian. The team are now loading their app and plan to have their MVP ready by October 2022. They respect that it’s a complex, interdisciplinary project and so are always looking to work with cooperation partners, scientific partners and also with Universities. For now the team is focused on developing their app further and supporting those in walking the path of healing.